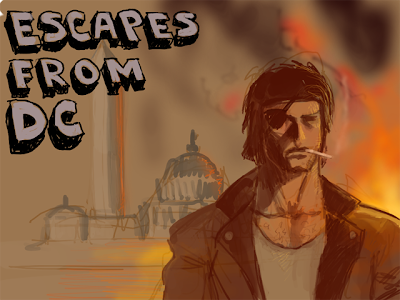 "Escapes From DC" is from the DC Examiner for January 15, 2009. So the eye patch is on the wrong eye, I didn't have a reference for the text, my Snake is more Solid than Plissken, and my post-apocalyptic DC is more post-rush hour, but here's Snake Plissken escaping from a blowed up D.C.

The article lists places for us locals to escape to for the weekend to escape the madness of the inauguration when a million people turn D.C. into a giant sardine can.

I have a small connection to Snake Plissken. Back when I was a colorist with UDON Entertainment, I had the opportunity to color the Snake Plissken book which was just about to drop. The current colorist was flaking out and they needed someone to pick up the slack stat. It sounded like a dream gig and the publisher was clearly in love with the project. Who could blame her. It's SNAKE FRIGGIN PLISSKEN! Unfortunately, the turn around time was insane. They needed the book colored by Monday. I met them on Saturday. No way I could turn it around in two days. I had to pass. Ah well. So there you go. Enjoy the inauguration if you're brave enough to come down. I will have the best seat in town, my couch in my warm, WARM, apartment.
Posted by Jamie Noguchi at 6:09 AM