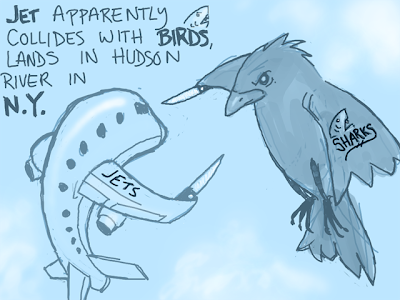 "Jet Apparently Collides With Birds, Lands in Hudson River in N.Y." is actually the sub-headline of an article entitled "Passengers Survive Crash" in the Express for January 16, 2009. The only reason I can make a joke is because everyone made it out safely. In my head, I imagined the jet and the birds facing off like the Jets and Sharks in West Side Story, most likely because I just saw the National Theater production of the musical. It's also likely my brain is not quite ripe yet. Distributed by Tubemogul.
Posted by Jamie Noguchi at 6:15 AM