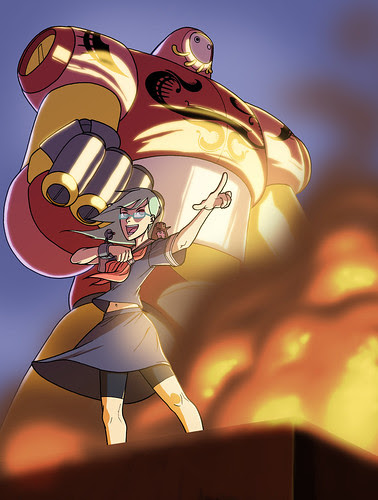 My friend Chris (check out his comic unseenllc.com/sledgebunny/) asked for some art to throw up on some fliers for Katsucon 2011 and this is the thing I came up with, a giant Daruma robot.

This is kind of my play on the whole school boy controlling a giant robot super robot theme. Except instead of a little boy I substituted an awesome chick with green hair.

I think they live in the same universe as Great Kahuna Bot V. Someday, there will be comics or toys or both.

And of course, I snuck in Puppy Cow!

Posted by Jamie Noguchi at 4:24 PM