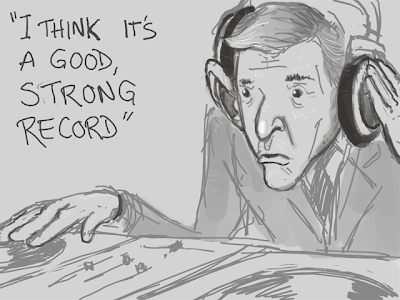 "'I Think It's A Good, Strong Record'" is from the Express for January 13, 2009. Caricature is not my strong suit, but with such a good headline, I had to give it a shot. So this is Bush trying to spin something good out of his horribly tarnished record. The article is about Bush's last press conference in which he tried his best to defend his record. History will ultimately decide, but for now, let's enjoy Bush spinning some old school jams.

Posted by Jamie Noguchi at 6:18 AM